In recent years there has been a new following of runners traversing Zion National Park. It has been most often tagged the “Zion Traverse”. However, in Jared Campbell’s wonderful report of his and Karl Meltzer’s trip in 2008 HyperPhil Lowry, a Utah local and accomplished ultrarunner, commented that “I believe John Moellmer was the first to actually do the entire Zion Train, as it was called then and still is called now”. He then asked that in respect of those first adventure runners that everyone in the future please refer to the run as the “Zion Train”. I will make sure I do the same. However, in our case, I need to put a twist on it.

I’ve had my eye on the Zion Train since the fall of 2009 when I was just barely getting into adventure runs. It has taken me this long to finally pull it off. On Wednesday, May 18th, along with friends Scott, Matt, and Josh we attempted to do what so many have successfully done before us, traverse Zion National Park on foot from the East entrance to Lee Pass in Kolob Canyons, a 48 mile run with nearly 10,000 ft of vertical climbing. We knew the odds were against us as a very large storm was pushing through the state, but as with many recent runs we hoped it would hold off – or at least be kind to us – through our run.

We drove down on Tuesday night with Scott’s two cousins in tow. Over the years I have become less interested in remembering people’s names when I know I won’t ever see them again, so I decided to give them nicknames. For the duration of the trip they would be known as ‘Ed’ and ‘Frank’. They actually seemed to welcome it. We camped just outside the East entrance at about 11pm and tried to sleep through a very wet and windy night. Our alarms were set for 6am, but weren’t needed as we were all awoken to Ed’s loud complaining of a very wet sleeping bag due to his inability to close the tent door. Silly Ed. We quickly broke camp and were to the East Rim trailhead by 7am. 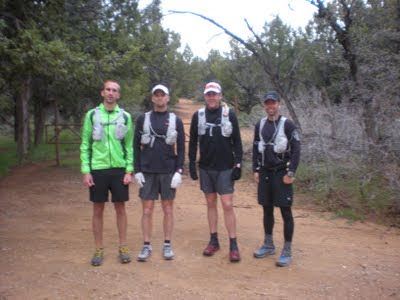 Josh, me, Matt, and Scott
We took off up the trail at a very easy pace. With the previous night’s rain the very sandy ground was held a little firmer and we were able to run unhindered. We made every effort to reign in our excitement and keep it casual as we knew we still had a long way to go. The day was young, but the weather seemed to be holding with heavy cloud cover, but only patchy moments of very light sprinkling. The first 11.6 miles would take us up over the east plateau of the park and drop us down Echo Canyon into the Weeping Rock area and along the paved road to The Grotto. This section of the trail is absolutely gorgeous. There is something new at every turn and the trail is extremely easy to run. A couple of pics of this section are below: 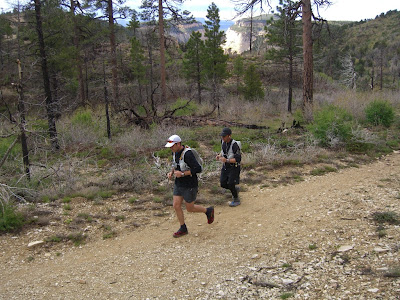 Matt and Scott at about mile 3 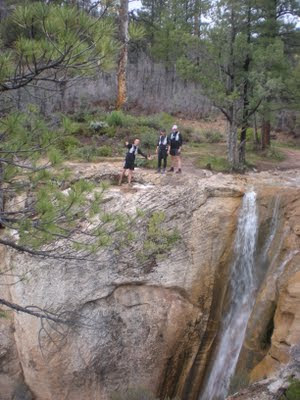 Jolley Gulch waterfall. What you see is the top 3rd of it. 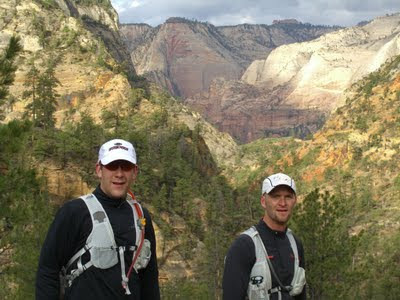 Matt and I at the top of Echo Canyon
The drop into Echo Canyon and Weeping Rock is like nothing I’ve ever seen. I’ve spent a lot of time in Zion canyoneering and hiking, but I had never been in this part of the park. I was constantly in awe of the trail as it cut into the side of the cliff and hillside. Much of the trail was bordered by a deep cavern (I couldn’t help but long to have a rope and go down it) and it was hard not to stop and peer over the edge. Running down we just let gravity do its work and we cruised this whole four mile section to the bottom. Amazing. 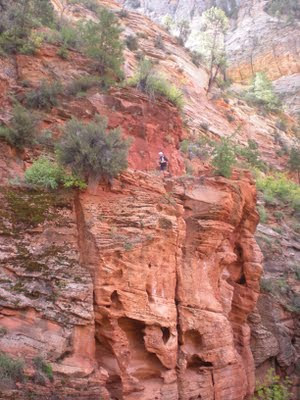 Matt running down into Weeping Rock 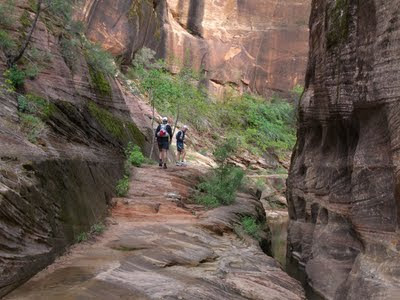 The slot canyon runs right next to the trail. 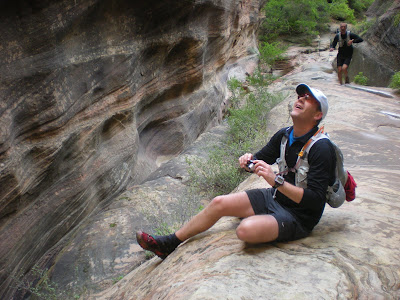 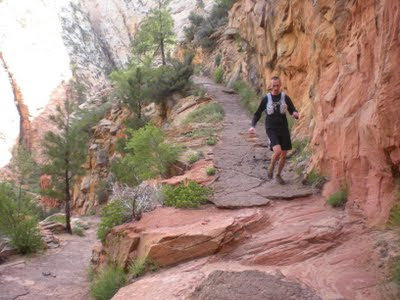 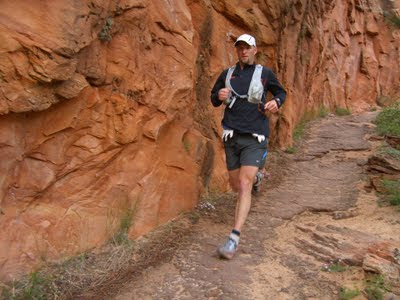 You can’t help but run fast on this section.
We met Ed and Frank at the Grotto. The weather had now started to turn and it began to rain. Knowing we still had most of the run ahead of us and being a little worried about the weather I told the boys to make sure they checked the visitor center before driving out of the canyon to see if we had turned around. That would turn out to be a wise decision. We made our way up the Angels Landing trail, another trail I have never been on. We climbed quickly through the paved switchbacks and up to the Scout Overlook. Matt had been struggling with some tummy issues since we stopped at the Grotto and he and Josh had fallen back a couple of hundred yards, but nothing major and we were still making good time. Like Scott, there was a part of me that wanted to run over and tag Angels Landing proper, but we just didn’t have the time. It was at this spot that the rain and wind picked up. We had donned our weather gear a few minutes previous – garbage bags – and were now looking at 35 more miles of wet, cold running. 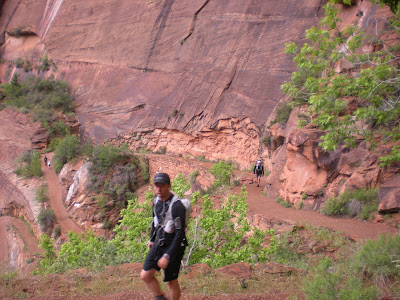 Heading up Angels Landing. Note the dry cliff above Matt’s head (in the distance). 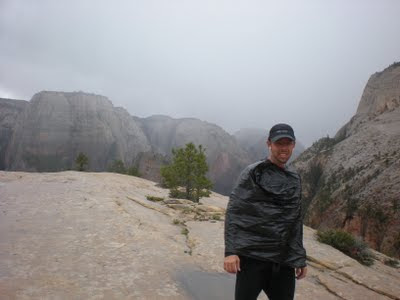 Scott on top of the Angels Landing plateau 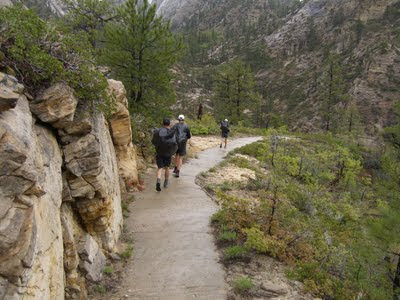 Running down into Telephone Canyon.
The climb out of Telephone Canyon to the West Rim trail is absolutely stunning. You are surrounded by cliffs with massive waterfalls, trees of every size, and beautiful little flowers everywhere. Unfortunately, as we climbed higher along the cliffside the soft rain turned to heavy snow and the rocky path was now mud and sleet. When we reached the West Rim Spring for Matt to refill his water we were soaked and a little cold . . . and we still had 30 miles ahead of us. It was near here that I first talked with the boys about considering turning back. We discussed options that ranged from continuing to Hopp Valley to only going a couple more miles to see if things improved. However, after another quarter mile of nasty mud and having to walk on what would have normally been very runnable terrain we all decided to turn around, not only due to the slow going and the obvious increase in time it would have taken, but more importantly for our own safety. The weather was obviously not going to improve and the trail would only get worse. We made the smart choice and headed back down into Telephone Canyon. 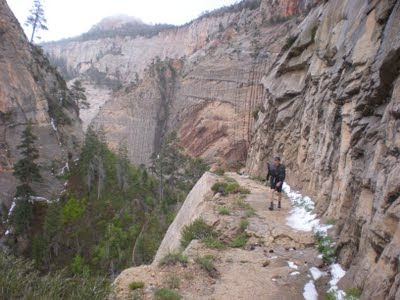 The climb out of Telephone Canyon. You can see the trail hundreds of feet below. 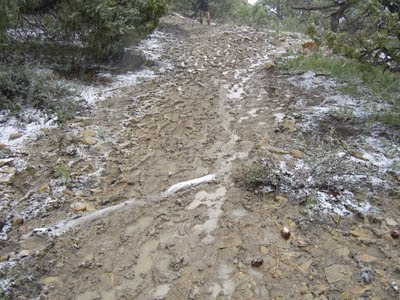 Our turn-around spot. You can see how bad it is and it wasn’t going to improve. 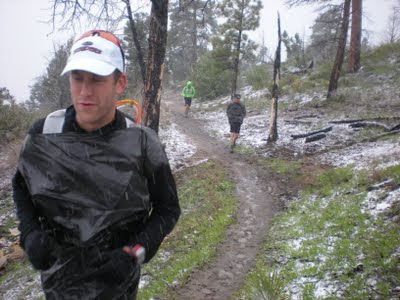 Running back down from where we turned around. Messy.
The run back down into the main canyon was incredible. The weather let up once we got below the storm, if even for a short time and we were able to remove the bags and run unhindered. The disappointment of having to turn back quickly faded as we knew we made the right decision and we had a blast bombing the trails and enjoying the beautiful views. Once back atop the Angels Landing plateau the weather really got nasty again and the heavy rains began to fall. We ducked into a small cave for about 10 minutes and had some lunch before continuing to the bottom. Waterfalls appeared out of nowhere on the cliffs above, obviously from flash flooding due to the heavy rain and snow above.
We continued down the switchbacks of the main paved trail that we had cruised up only a couple/few hours earlier. There were more tourists on the trail now, all moving slow and getting in the way. We tried to skirt around them as best we could, but we constantly had to stop and wait. I got tired of it and would time my pace so that I could hop over the walls and drop 4 – 5 feet to the next switchback while they were making the turn. I got more than one scream out of many of the small Asian women. It was really cute. On one long switchback I hopped a wall that had a solid 15 foot drop. There were two large rocks jutting out from the wall and I used them as stepping stones then dropped the last 8 feet to the ground landing only a few feet in front of a large German lady hiking up. Her very audible scream made me laugh, but I kind of felt bad for startling her. We had the best time running down. Remember that photo above where Matt had that dry cliff above? Well, now it was a waterfall and we had no choice but to run through it. There is video below. Awesome. 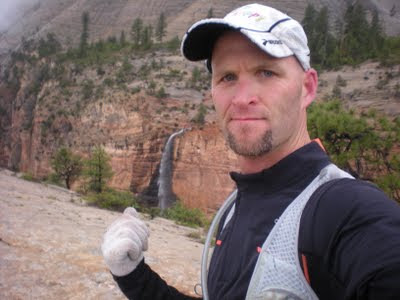 Uh, where did that waterfall come from? 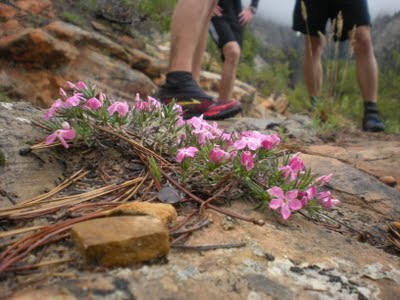 This is one of my favorite pics from the trip.
Once back on the road we decided we weren’t going to get any more wet than we already were so we continued to run all the way back to the visitor center. It was a very casual run with frequent walking breaks to take photos and just look around. We were worried that Frank and Ed had already left the park, but once we got down we looked for the car and there it was with the two boys sitting in the front seats. It was great to change our clothes and drink a Pepsi before heading out of the park.
I can’t say enough about this trip. It was Epic, to put it lightly. There will always be a twinge of disappointment for not being able to finish the whole thing. But I know I’ll go back when the weather is better and will enjoy that trip just as much. I was with amazing friends in one of my most favorite spots on the planet. And we still ran about 30 miles. I can’t wait to go back!
**Photos courtesy of myself, Matt, and Josh (I didn’t have Scott’s yet).

Full video to come in a few days!

8 thoughts on “The Zion Trainwreck”