Warning: Declaration of Blogger_Import_List_Table::prepare_items($blogs, $JSInit) should be compatible with WP_List_Table::prepare_items() in /homepages/12/d241774733/htdocs/refuse2quit/wp-content/plugins/blogger-importer/blogger-importer-table.php on line 14
 Running on the Edge | Refuse 2 Quit
For decades the lines between ultra-runners, hikers, peak-baggers, and mountaineers have been pretty clearly defined, at least in the US (in Europe these lines have been obscured for ages). However, over the last few years we’ve seen those lines become a little more distorted. Historically, most ultra-runners were ex-marathoners who were tired of the distance and sought to try their luck running farther.  Recently, if one were to take a closer look, you would find that many ultra-runners are hikers and peak-baggers who want to challenge themselves more and see how fast they can move over traditional hiking trails and up mountains. This new vision of looking at how we ascend mountains and moving over technical terrain is being broadened, the boundaries of speed and safety are being pushed, and times from trailhead to summit and round trip are dropping dramatically.
While most evident in the recent Fastest Known Times (FKT) of the Grand Teton and Gannett Peak by Andy Anderson, Killian Jornet and Anton Krupicka, respectively, we continue to see this attitude becoming more apparent across the mass of US ultra-runners, as seen in Jared Campbell’s and Matt Hart’s recent success of the Nolan’s 14 and the FKT of the Utah Triple Crown getting beat twice this past summer. While this mentality may seem to be more pervasive among the elite runners, it is also becoming day-to-day training throughout the masses of the ‘average’ ultra-runner.
Before I started running I was a religious rock climbing and frequent peak-bagger. If I wasn’t pulling on technical boulder problems or sending ‘at-my-limit’ roped routes I could often be found tagging many of the local peaks, both in the Wasatch and Uintas. I actually took up running as a means to gain better cardio so that I could push summit times. It didn’t take long before I was running in six hours mountains that used to take me three days to hike. Along with several friends, we’ve started doing ascents of more technical routes to the tops of these peaks, upping the technical requirements and the risk. The end result has been an increase in the number of mountains I’ve climbed this year (over 65 so far) , along with a solid improvement in my ultra training, as was evidenced by my success at running my first Wasatch 100. 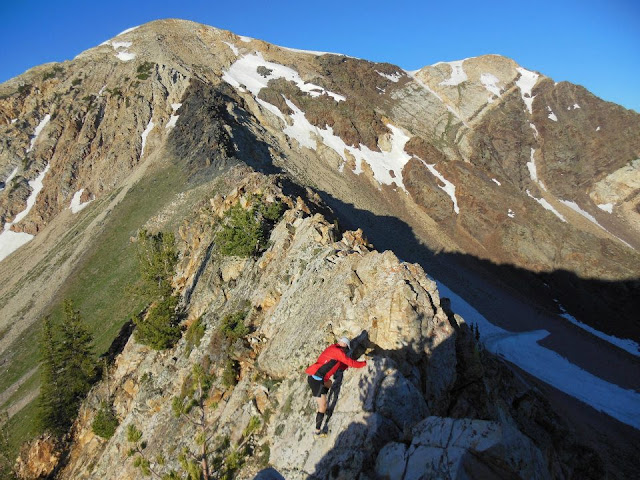 Don’t be fooled, however, it’s a serious game that comes with considerable risk. Killian, Tony K, and Jared all make for great reading and fun to watch youtube videos. Since I’m familiar with the peaks and routes they have been climbing I can attest that the difficulty is much greater than it appears to be on film. Tony, just days ago, set a new FKT of Gannett Peak, crushing the old time by almost four hours. He chose to summit sans crampons and ice axe, something that would be considered suicidal by most mountaineers and hikers, especially considering the dodgy late season they are having on that mountain this year. Yet, unless he was to admit to it, he seemed to be quite comfortable in those types of conditions.
I was talking to a friend about it just this morning and he likened this new attitude towards deep sea diving. He noted that years ago people would have never attempted to dive hundreds of feet below the surface without a massive amount of equipment and back-up gear. Yet today people are diving deeper on a single breath of air and even now without fins. It’s astounding. Likewise, those of us who have taken up running /climbing summits on challenging 4th and easy 5th class routes without technical climbing gear are simply trading out heavy ropes and protection that can sway balance with the ability to move freer and faster. Yes, the risk is greater, but when done with confidence and careful movement, on terrain where we feel comfortable and well within our abilities, the risk is mitigated and liability is at a minimum. Speaking from personal experience, I don’t feel that at any point to date I’ve put myself in any greater harm than at times climbing with full protection. The terrain I am moving over can most often be done without a rope, ice axe, or crampons, but is frequently used more to put the mind at ease then to provide actual protection. 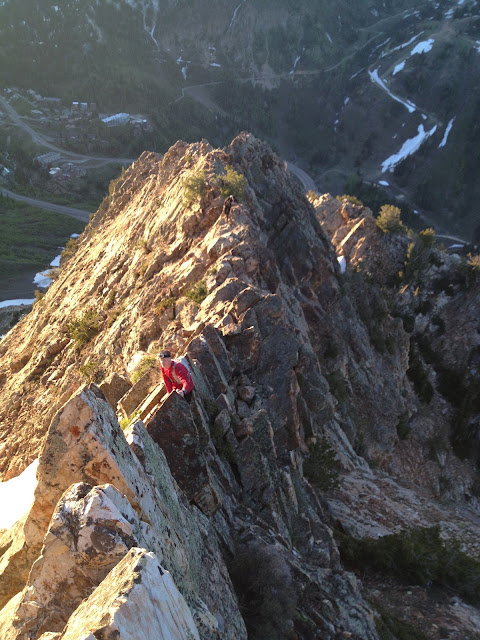 Matthew Van Horn on the south ridge of Mt Superior
Some would argue that this doesn’t fall within the realm of running or training for ultras. However, I’m certain if you were to ask anyone who has incorporated this activity into their training curriculum you would find that they would unanimously state that it has improved their fitness overall and made them a better all-around athlete and trail/ultra-runner. Even Tony K stated himself over the last few months that his new attitude towards ‘hiking’ has made him a better runner. Certainly it has made him stronger in the mountains. And no one will argue Killian’s ability to perform in the biggest mountain races around the world. His new Summits of My Life project with Salomon running is a testament to this.
The point of all of this is to simply show a different side to our sport of trail and ultra running. That the concepts we’ve learned in other aspects of our life are now being infused with our ability to run far and move over technical terrain. I can say with great confidence that because of my rock and mountain climbing background I am a better runner on technical terrain, especially steep descents. The lines of running, climbing, and peak-bagging are becoming more obscure and our sport is becoming more exciting every day!
Enjoy this video a friend of mine made when we climbed the south ridge of Mt Superior, Utah. Unfortunately, his battery died before he was able to get us flying down the single-track back to the car.

3 thoughts on “Running on the Edge”